Cash is “Safe to Use,” Despite the SARS-CoV-2 Virus

Researchers studying the likelihood of Covid-19 transmission through cash often cited a paper by Thomas et al. (2008) that found that the influenza virus could survive on banknotes for up to three days in high concentrations, under ideal laboratory conditions. The study considered that “although viruses have not been found on money, the potential for their transmission via money is possible.”

Angelakis et al. (2014) had found that the efficiency of viral transmission through cash depended on the “viral strain, the nature of the host cells and surfaces, and atmospheric conditions.” ECB-commissioned research on other viruses, such as the avian flu (2006) and swine flu (2009), had already concluded that cash did not pose a significant risk of viral transmission to its users.

The ECB conducted ad hoc research into whether cash played a role in the transmission of Covid-19 to ensure the integrity of euro banknotes as means of payment.

ECB: THE SARS-COV-2 VIRUS LASTS LONGER IN STAINLESS STEEL THAN IN €10 NOTES

The ECB, with researchers from the Department of Molecular and Medical Virology at the Ruhr University Bochum in Germany, Dr. Brill + Partner GmBH in Hamburg, and BluTest Laboratories Ltd. in Glasgow, found that the SARS-CoV-2 virus could survive on cash for 30 minutes to 72 hours, but only in limited quantities (Tamele, Zamora-Pérez et al. 2021: 15). ECB research found that the SARS-CoV-2 virus “was more stable and therefore survived longer on stainless steel than on the €10 banknote and all the coin types [€1, 10 and 5 cents]” (Tamele, Zamora-Pérez et al. 2021: 17).

The ECB results coincide with the bottom range of results reported for banknotes in the literature. Tamele et al. said the results could “depend greatly on experiment conditions: humidity, temperature, mode of virus application to the surface, dosing and finally interpretation of the results” (Tamele, Zamora-Pérez et al. 2021: 18). 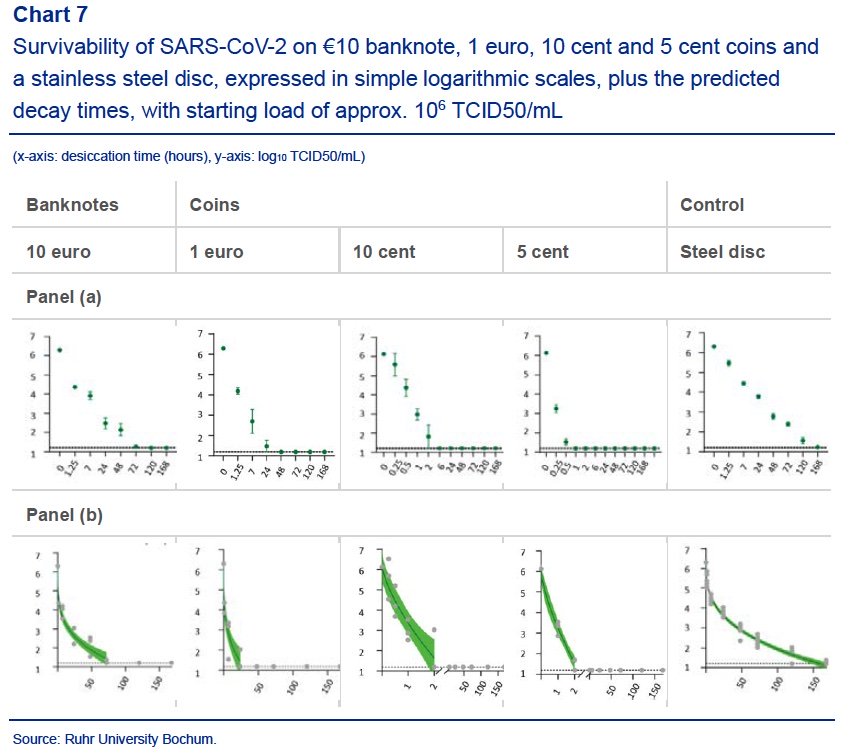 ECB research also tested for the likelihood of transferring the SARS-CoV-2 virus from contaminated cash to humans via fingers. The ECB developed new protocols for transferability testing. Researchers used two viral loads (a high load of 106 TCID50/mL and a lower load of 104 TCID50mL). They also employed “wet” inoculum, i.e., immediately after virus droplets were applied to tested surfaces, and “dry” inoculum, i.e., after visible drying of inoculum on tested surfaces).

According to the ECB, “the transferability of the virus from cash is almost non-existent and also lower than for the reference surfaces (PVC and stainless steel). This could be attributed to its porosity in the case of the €10 banknote, and to the presence of copper in the coin alloy in the case of the 10-cent coin.” (Tamele, Zamora-Pérez et al. 2021: 18). The scientific literature has barely assessed the transferability of the SARS-CoV-2 virus from surfaces to skin. Lopez et al. (2013) found that porous surfaces (or fomites) such as cotton, polyester, and paper currency had lower transfer rates than non-porous materials, such as stainless steel.

“[In the euro area, c]ash payments were reduced partly due to fears of contagion via cash, which were probably magnified by media statements and recommendations by public authorities.” – Tamele, Zamora-Pérez et al. 2021: 26.

The SARS-CoV-2 virus spreads primarily through airborne transmission by inhaling respiratory secretions infected with the coronavirus. Transmission via fomites plays a relatively minor role, with the risk estimated to be between 1:10,000 and 1:1,000,000.

This ECB study authoritatively asserts that the risk of transmission of Covid-19 when handling banknotes and coins is very low and “very limited in everyday life conditions, and therefore cash does not contribute to the spread of Covid-19” (Tamele, Zamora-Pérez et al. 2021: 21). The SARS-CoV-2 virus “does not survive on the surface of inanimate objects any longer than many other similar viruses (SARS-CoV-1, influenza), neither can it be transferred efficiently to the human hand finger[s]” (Tamele, Zamora-Pérez et al. 2021: 26).

The report confirms statements made and procedures adopted by several central banks during the Covid-19 pandemic indicating that cash was safe (see the U.S. Federal Reserve, the Banco de México, and the South African Reserve Bank).

Although the study and its authors deserve all praise and amplification, the publication of the results comes at a very late stage. Governments (such as the Johnson administration in the United Kingdom) and the financial industry used the mistaken belief that cash could play a role in Covid-19 transmission to advance their war on cash. The idea has also posed a serious communication challenge to the global cash community.

This website uses cookies to improve your experience while you navigate through the website. Out of these, the cookies that are categorized as necessary are stored on your browser as they are essential for the working of basic functionalities of the website. We also use third-party cookies that help us analyze and understand how you use this website. These cookies will be stored in your browser only with your consent. You also have the option to opt-out of these cookies. But opting out of some of these cookies may affect your browsing experience.
Necessary Always Enabled
Necessary cookies are absolutely essential for the website to function properly. This category only includes cookies that ensures basic functionalities and security features of the website. These cookies do not store any personal information.
SAVE & ACCEPT